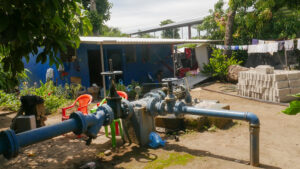 LA LIBERTAD, El Salvador, Oct 8 2021 (IPS) – As the saying goes, united we stand, divided we fall, hundreds of families in rural communities in El Salvador are standing together to gain access to drinking water.

The Salvadoran state fails to fulfill its responsibility to provide the resource to the entire population, and the families, faced with the lack of service in the countryside, have organized in “Juntas de Agua”: rural water boards that are community associations that on their own manage to drill a well and build a tank and the rest of the system.

It is estimated that in El Salvador there are about 2,500 rural water boards, which provide service to 25 percent of the population, or some 1.6 million people, according to data from the non-governmental Foro del Agua (Water Forum), which promotes equitable and participatory water management.

One of those community systems has been set up in the small village of Desvío de Amayo, in the canton of Cangrejera, part of the municipality and department of La Libertad, on the central coastal strip of El Salvador.

The system provides water to 468 families in Desvío de Amayo and eight other nearby villages.

“Governments have the constitutional obligation to provide drinking water in each country, but when they are not able to do it, as it happens here, the families decided to meet to take decisions and seek support either from NGOs or municipal governments to set up drinking water projects”, José Dolores Romero, treasurer of the Cangrejera Drinking Water Association, told IPS.

Created in the 1980s, this board finally obtained in 2010 a contribution of US$ 117,000 from the National Administration of Aqueducts and Sewers (Anda), the sector’s authority, for the expansion and improvement of its network infrastructure, he explained.

For more information, you can read an article on the subject of this video here.

As agreed by those involved in this effort, each family pays seven dollars for 20 cubic meters a month. If they consume more than that, they pay 50 cents per cubic meter.

“We benefit from the water, it is a great thing to have it at home, because we no longer have to go to the river, remember that we cannot go there because it overflows during the rainy season, so this community system benefits us a lot”, María Ofelia Pineda, from the village of Las Victorias, told IPS, while washing a frying pan and other dishes.

“Before, we had two or three hours of water during the day, and now we have it all day long, I am very happy for that, because I have it all day and all night,” said Ana María Landaverde.