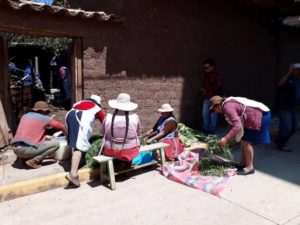 Quechua indigenous farmers from the town of Huasao, in the Andes highlands of Peru, cut insect repellent plants in front of Juana Gallegos’ house, while others prepare the biol mixture, a liquid organic fertiliser that they use on their vegetable crops. CREDIT: Mariela Jara/IPS

HUASAO, Peru, May 6 2020 (IPS) – It’s eight o’clock in the morning and Pascuala Ninantay is carrying two large containers of water in her wheelbarrow to prepare with neighbouring women farmers 200 litres of organic fertiliser, which will then be distributed to fertilise their crops, in this town in the Andes highlands of Peru.

“We grow healthy, nutritious food without chemicals,” she tells IPS, describing the sustainable agriculture she practices in Huasao, a town of about 1,500 people in Quispicanchi province, 3,300 metres above sea level, in the department of Cuzco in south-central Peru.

It will take them four hours to prepare the “biol”, a liquid fertiliser composed of natural inputs contributed by the local farmers as part of a collective work tradition of the Quechua indigenous people, to which most of the inhabitants of Huasao and neighbouring highlands villages in the area belong.

“Between all of us we bring the different ingredients, but we were short on water so I went to the spring to fill my ‘galoneras’ (multi-gallon containers),” explains Ninantay.

The women, gathered at the home of Juana Gallegos, work in community. While some gather insect repellent plants like nettles and muña (Minthostachys mollis, an Andes highlands plant), others prepare the huge plastic drum where they will make the mixture that includes ash and fresh cattle dung.

They keep working until the container is filled with 200 litres of the fertiliser which, after two months of fermentation in the sealed drum, will be distributed among them equally.

Making organic fertiliser is one of the agro-ecological practices that Ninantay and 15 of her neighbours have adopted to produce food that is both beneficial to health and adapted to climate change.

They are just a few of the almost 700,000 women who, according to official figures, are engaged in agricultural activities in Peru, and who play a key role in the food security and sovereignty of their communities, despite the fact that they do so under unequal conditions because they have less access to land, water management and credit than men.

That is the view of Elena Villanueva, a sociologist with the Flora Tristán Centre for Peruvian Women, a non-governmental organisation that for the past two years has been promoting women’s rights and technical training among small-scale women farmers in Huasao and six other areas of the region, with support from two institutions in Spain’s Basque Country: the Basque Development Cooperation agency and the non-governmental Mugen Gainetik.

“During this time we have seen how much power the 80 women we have supported have gained as a result of their awareness of their rights and their use of agro-ecological techniques. In a context of marked machismo (sexism), they are gaining recognition for their work, which was previously invisible,” she told IPS. A group of women farmers are ready to head out to the plots they farm on the community lands outside of Huasao, a rural town in Peru’s Andes highlands department of Cuzco. They are wearing masks to prevent the spread of COVID-19, because they depend on their production for food and income from the sale of the surplus, to cover their household expenses. CREDIT: Nayda Quispe/IPS

This group of women farmers is convinced of the need for nutritious food that does not harm people’s health or nature, and they are happy to do their small part to make that happen.

“We want to have a variety of food constantly available, but taking care of our soil, water, plants, trees and air,” says Ninantay.

“We no longer use chemicals,” says Gallegos. “Thanks to the training we have received, we understood how the soil and our crops had become so dependent on those substances, we thought that only by using them would we have a good yield. But no, with our own fertilisers we grow lettuce, tomatoes, chard, artichokes, radishes and all our big, beautiful, tasty vegetables. Everything is organic.”

Once they were producing their fresh produce using agro-ecological techniques, the women decided to also begin growing their staple crops of potatoes and corn organically. “I see that the plants are happier and the leaves are greener now that I fertilise them naturally,” says Ninantay.

Villanueva says these decisions on what to plant and how to do it contribute to new forms of agricultural production that meet the food needs of the women and their families while also contributing to the sustainable development of their communities.

“With agro-ecology they enrich their knowledge about the resistance of crops to climate change, they carry out integrated management of pests and diseases, and they have tools to improve their production planning,” she explains.

And even more important, “this process raises their self-esteem and strengthens their sense of being productive citizens because they are aware that they are taking care of biodiversity, diversifying their crops and increasing their yields,” she adds.

Thanks to this, these peasant women are obtaining surpluses that they now market.

Three times a week, Ninantay and the other women set up their stall in Huasao’s main square where they sell their products to the local population and to tourists who come in search of local healers, famous for their fortune telling and cures, which draw on traditional rituals and ceremonies. The agro-ecological women farmers set up their stall three times a week in the main square of the rural municipality of Huasao to sell lettuce, tomatoes, Chinese onions, radish and other fresh produce. They are now marketing their wares in compliance with the health regulations put in place in response to the coronavirus pandemic, for which they have received training from the municipal authorities. CREDIT: Nayda Quispe/IPS

However, the measures implemented by the central government on Mar. 15 to curb the spread of the COVID-19 pandemic have reduced trade, by not allowing outsiders to visit Huasao, known locally as “the village of the witchdoctors” because of its healers.

But the work in the fields has not stopped; on the contrary, the women are working harder than ever.

“We used to have the income of my husband who worked in the city, but because of the state of emergency he can no longer leave,” says Ninantay. “My fellow women farmers are in the same boat, so we continue to harvest and sell in the square and what we earn goes to buying medicines, masks, bleach and other things for the home.”

Initially, she says, the husbands didn’t want their wives to participate in the project and stay overnight away from home to attend the training workshops. But after they saw the money they were saving on food and the income the women were earning, “they now recognise that our work is important.”

Their husbands, like most Huasao men, do not work in the fields. They work in construction or services in the city of Cuzco, about 20 km away, or migrate seasonally to mining regions in search of a better income.

So the community lands, where each family has usufruct rights on three-hectare plots, were left in the hands of women, even though the title is usually held by the men. With the opportunity offered by the Flora Tristán project, they have increased their harvests and are no longer merely subsistence farmers but earn an income as well.

Despite the pandemic, the women obtained permission from the authorities and received training on the care and prevention measures to be followed in order to market their products under conditions that are safe for them and their customers.

Their stall at the open-air market in the town’s main square is already known for offering healthy food, and on Mondays, Tuesdays and Thursdays they run out of vegetables and other products they offer. They also sell their wares in other fairs and markets.

Their stall in the municipal market is also seen as an alternative to return to more natural foods in the face of the increasing change in eating patterns in rural areas.

“Many people don’t want to eat quinoa or ‘oca’ (Oxalis tuberosa, an Andean tuber), they prefer noodles or rice,” says Ninantay. “Children fill up on sweets and junk food and they are not getting good nutrition, and that’s not right. We have to educate people about healthy eating if we want strong new generations.”

She stresses the importance of people understanding that nature, “Mother Earth”, must be respected.

“We have to recover the wisdom of our ancestors, of our grandmothers, to take care of everything that we need to live,” she warns. “If we do not do this, our grandchildren and their children will not have water to drink, seeds to plant, or food to eat.”

Flora Tristán’s Villanueva announced that the 80 women farmers in the programme would participate in initiatives for the recovery of agricultural and water harvesting practices based on forestation and infiltration ditches, using native trees known as chachacomas (Escallonia resinosa) and queñuas (Polylepis).

The women hope that their experience and knowledge will be extended on a large scale, because although they share with their families, neighbours and relatives what they are learning, they believe that the authorities should help expand these practices.

“We would like not only Huasao, but all of Cuzco to be an agro-ecological region, so that we can help nature and guarantee healthy food for the families of the countryside and the city,” says Gallegos, convinced that if they could do it, everyone can.