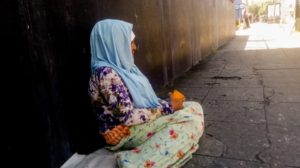 This is part of a series of features from across the globe on human trafficking. IPS coverage is supported by the Riana Group. An older woman panhandles on a street in San Salvador. Criminal trafficking groups take advantage of vulnerable people, such as the destitute, to force them to beg. But in Central America, 80 percent of the victims of trafficking are women and girls, for purposes of sexual exploitation. Credit: Edgardo Ayala/IPS

SAN SALVADOR, Nov 8 2019 (IPS) – Central America is an impoverished region rife with gang violence and human trafficking – the third largest crime industry in the world – as a major source of migrants heading towards the United States.

Human trafficking has had deep roots in Central America, especially in Guatemala, Honduras and El Salvador, for decades, and increasingly requires a concerted law enforcement effort by the region’s governments to dismantle trafficking networks, and to offer support programmes for the victims.

The phenomenon “has become more visible in recent years, but not much progress has been made in the area of more direct attention to victims,” Carmela Jibaja, a Catholic nun with the Ramá Network against Trafficking in Persons, told IPS.

“We know that El Salvador, Honduras and Guatemala are countries with a heavy flow of undocumented migrants, which puts them at risk of becoming victims of trafficking.” — Carlos Morán

This Central American civil society organisation forms part of the Talita Kum International Network against Trafficking in Persons, based in Rome, which brings together 58 anti-trafficking organisations around the world.

Jibaja pointed out that “the biggest trafficking problem is at the borders, because El Salvador is a country that expels migrants,” as well as in tourism areas. The most recognised form of trafficking in the region is sexual exploitation, whose victims are women.

“We know that El Salvador, Honduras and Guatemala are countries with a heavy flow of undocumented migrants, which puts them at risk of becoming victims of trafficking,” Morán told IPS while participating in a regional forum on the issue, hosted Nov. 4-8 by San Salvador.

The “Regional Seminar on Investigation Techniques and Protection of Victims of Trafficking in Persons” brought together officials from the office of the public prosecutor, police officers, legal experts and other key actors and experts from Guatemala, El Salvador and Honduras, the countries that make up the so-called Northern Central American Triangle.

The objective is to strengthen capacities and good practices in the investigation of trafficking, especially when the crime is transnational in nature.

Morán and other participants in the meeting declined to talk about figures on the extent of trafficking in the region, due to the lack of reliable data. In the countries of the Northern Triangle there are government efforts to develop victim care programmes, but they are insufficient and civil society organisations have had to take up the challenge.

Mirna Argueta, executive director of the Association for the Self-Determination of Salvadoran Women (AS Mujeres), told IPS that “the problem is serious, because we are facing networks with great economic and political influence, and victims are not being protected,” and there are very few programmes to help with their reinsertion in society.

Her organisation has been working since 1996 with victims of trafficking, offering psychological and medical support, and is also an important ally of the Attorney-General’s Office in victim protection work.

AS Mujeres collaborates with the police and prosecutors when victims have to be moved from one place to another, in the most secretive way possible, especially when judicial cases against organised crime networks are underway.

In the past it has also offered shelter to women victims of trafficking, but now the prosecutor’s office does, said Argueta, who is also coordinator in El Salvador of the Latin American Observatory on Trafficking in Persons, which brings together 15 countries.

AS Mujeres’ victim care programme includes, in addition to psychological support, medical assistance which incorporates non-traditional techniques such as biomagnetism, performed by a physician specialising in this area, as well as massage and aromatherapy.

“Experience has shown us that with the combination of these three techniques, recovery is more effective, and care is more integral,” said Argueta.

She added that since the programme’s inception in 1996, it has served some 600 trafficking victims.

They currently offer support to five women, who IPS could not speak to because they are under legal protection, and providing their names or a telephone number for them has criminal consequences.

For the same reason, the public prosecutor’s office also vetoed conducting interviews with victims under its protection.

“When the victim has gone through different stages, we integrate her with other women and they can share their experiences, making it less painful, and helping them with their reinsertion in society,” Argueta added.

She said many victims feel they are “damaged,” or worthless, and they turn to prostitution.

Victims can spend anywhere from six months to two and a half years in the programme, depending on the complexity of each case. For example, there are women with acute problems of depression, suicidal thoughts and persecutory delusions.

According to figures from the United Nations office in Honduras, released in July, 80 percent of the victims of human trafficking in Central America are women and girls.

In El Salvador, 90 percent of cases involve sexual exploitation, according to official figures provided by the public prosecutor’s office during the regional forum in San Salvador.

However, other types of trafficking have been detected, such as labour exploitation, forced panhandling and others.

So far this year, the prosecution has reported 800 victims, cases that are still open. Mirna Argueta (L), executive director of the Association for the Self-Determination of Salvadoran Women, and Catholic nun Carmela Jibaja, of the Central American Network against Trafficking in Persons, are two activists working to provide care for victims of trafficking, who are mostly women. Credit: Edgardo Ayala/IPS

In Guatemala, in 2018, the Public Prosecutor’s Office detected 478 possible victims of human trafficking, four percent more than the previous year. There were 276 reported cases, also an increase of four percent.

They were victims of illegal adoptions, labour exploitation, forced marriage, forced panhandling, sexual exploitation and forced labour or services. But the most invisible form of trafficking, according to the prosecutor’s office, is the recruitment of minors into organised crime.

Experts consulted by IPS point out that many trafficking cases are the product of a relatively new phenomenon: involvement in trafficking by the gangs that are responsible for the crime wave in the three Northern Triangle countries.

The gangs have mutated into bona fide organised crime groups, with tentacles in the illicit drug trade, extortion rackets, “sicariato” or murder for hire and now human trafficking, among other criminal activities.

In El Salvador, it is common to hear stories in neighborhoods and towns controlled by gangs about young girls who gang leaders “ask for”, to be used as sex toys by the leaders and other members of the gang, and the families hand them over because they know that they could be killed if they don’t.

But the gangs go farther than that, forcing their victims to provide sexual services for profit, another aspect of trafficking.

Official figures from the National Council against Trafficking in Persons, which brings together government agencies to combat the phenomenon, indicate that in 2018 there were 46 confirmed victims, 43 police investigations and 38 judicial proceedings.

The trials led to four convictions and two acquittals. The rest are still winding their way through court, according to the Council’s Work Report 2018.

The document also reported that the attention to victims included programmes to help them launch small enterprises, as well as measures of integral reparations for families of children and adolescents in the shelters.

Emergency response teams were also coordinated to provide assistance to victims, whether the women are foreigners or nationals.

El Salvador is part of the Regional Coalition against Trafficking in Persons and Smuggling of Migrants, along with Belize, Costa Rica, Guatemala, Honduras, Mexico, Nicaragua, Panama and the Dominican Republic.

At least 337 people from Honduras have been rescued since 2018, including 13 in Belize and Guatemala, according to a report by the Inter-Institutional Commission Against Commercial Sexual Exploitation and Trafficking in Persons in Honduras.