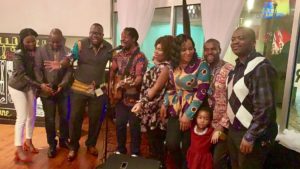 Electric does not even come close to sum up an atmosphere that was experienced at the New England Malawi Association-NEMA and Music Against Malaria-MAM event held at Tavola 153, on 153 Market street downtown Hartford City, Connecticut, USA. A renowned Malawian cultural music icon Code Sangala and the super star rising comic of the moment Ian Phiri proved to the diverse audience of Malawians, Zambians, Americans and Tanzanians who came out to support the show that disappointment is a word that does not exist in their Lingual. It was truly a masterly display of art, a synthesis of comedy and Malawian cultural music that gave birth to an atmosphere so exhilarating and yet so cosy and ambient.

Patrons arrived at the function pregnant with great expectations and indeed the artists lived up to their billing. “I haven’t had such type of fun in a long time, this event brought back fond memories, said one of the patrons Mr Acton Tsonga a resident of Plainville Connecticut.

The night began with remarks from the Chairperson of NEMA Mr Solomon Nkhalamba. In his speech he echoed sentiments of the importance of a people working together.” Tonight, we are here in line with one of the Associations objectives. We are proud to be a united body of sons and daughters who celebrate and mourn together without regard to tribal, regional, political, religious or other differences, but rooted in one bond of Mother Malawi”. He continued to reiterate that NEMA understands well the challenge malaria poses to children particularly those aged five and under, “it is such a great honour to join hands with Music Against Malaria in this fight and I urge diaspora Malawians to take this as a testament that Malawians can make a difference in Malawi regardless of where they are,” said Mr. Nkhalamba.

The stand-up comic Ian Phiri took to the stage at exactly 19 hours and immediately sent the audience into stitches, touched on subjects such as education, growing up in a Malawian household in America, and on his personal life experiences as a husband and a father.

The rest of the night patrons were treated to authentic Malawian cultural music performed by non-other than Mr CODE himself. He began his performance with Malawian folk songs and golden oldies, but the highlight of night came when he began to perform hits from his newly released album entitled Mizu. Songs such as Mukunama, Tithana and many others kept patrons on their feet throughout the remaining allotted time. It was a beautiful time of interaction, networking and camaraderie, all for a great cause, said Mrs Thandy Mwawu who travelled over 140 miles to attend the event. All proceeds realized are to be used in refurbishing a children’s ward at a district hospital in Chikwawa. Chikwawa district is one of the Malaria hotspots in Malawi.