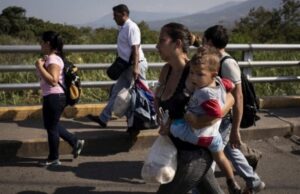 A Venezuelan family carrying a few belongings crosses the Simon Bolivar Bridge at the border into Colombia. Over the years, the migration flow has grown due to increasing numbers of people with unsatisfied basic needs. CREDIT: Siegfried Modola/UNHCR

CARACAS, Jul 26 2021 (IPS) – The exodus of more than five million Venezuelans in the last six years has led countries in the developing South, Venezuela’s neighbours, to set an example with respect to welcoming and integrating displaced populations, with shared benefits for the new arrivals and the nations that receive them.

In this region “there is a living laboratory, where insertion and absorption efforts are working. The new arrivals are turning what was seen as a burden into a contribution to the host communities and nations,” Eduardo Stein, head of the largest assistance programme for displaced Venezuelans, told IPS.

According to figures from the United Nations refugee agency, the UNHCR, and the International Organisation for Migration (IOM), 5,650,000 people have left Venezuela, mainly crossing into neighbouring countries, as migrants, displaced persons or refugees, as of July 2021.

“This is the largest migration crisis in the history of Latin America,” Stein said by phone from his Guatemala City office in the Interagency Coordination Platform for Venezuelan Refugees and Migrants (R4V), created by the UNHCR and IOM in partnership with 159 other diverse entities working throughout the region.

“This region is a living laboratory, where insertion and absorption efforts are working. The new arrivals are turning what was seen as a burden into a contribution to the host communities and nations.” — Eduardo Stein

Colombia, the neighbour with the most intense historical relationship, stands out for receiving daily flows of hundreds and even thousands of Venezuelans, who already number almost 1.8 million in the country, and for providing them with Temporary Protection Status that grants them documentation and access to jobs, services and other rights.

Colombia’s Fundación Renacer, which has assisted thousands of child and adolescent survivors of commercial sexual exploitation and other types of sexual and gender-based violence, is a model for how to welcome and help displaced persons.

Renacer, staffed by activists such as Mayerlin Vergara, 2020 winner of the UNHCR’s annual Nansen Refugee Award for outstanding aid workers who help refugees, displaced and stateless people, rescues girls and young women from places like brothels and bars where they are forced into sexual or labour exploitation, often by trafficking networks that capture the most vulnerable migrants.

“In Colombian society as a whole there has been a process of understanding, after the phenomenon was the other way around for several decades in the 20th century, of people displaced by the violence and crisis in Colombia being welcomed in Venezuela,” Camilo González, president of the Colombian Institute for Development and Peace Studies, told IPS.

When the great migratory wave began in 2014-2015, “many Venezuelans were taken on as half-price cheap labour by businesses, such as coffee harvesters and others in the big cities, but that situation has improved, even despite the slowdown of the pandemic,” said González.

Stein mentioned the positive example set by Colombia’s flower exporters, which employed many Venezuelan women in cutting and packaging, a task that did not require extensive training.

The head of the R4V, who was vice-president of Guatemala between 2004 and 2008 and has held various international positions, noted that in the first phase, the receiving countries appreciated the arrival of “highly prepared Venezuelans, very well trained professionals.” Yukpa Indians from Venezuela register upon arrival at a border post in Colombia. The legalisation and documentation of migrants arranged by the Colombian government allows migrants to access services and exercise rights in the neighbouring country. CREDIT: Johanna Reina/UNHCR

“One example would be the thousands of Venezuelan engineers who arrived in Argentina and were integrated into productive activities in a matter of weeks,” he said.

But, Stein pointed out, “the following wave of Venezuelans leaving their country was not made up of professionals; the profile changed to people with huge unsatisfied basic needs, without a great deal of training but with basic skills, and nevertheless the borders remained open, and they received very generous responses.”

But, he acknowledged, in some cases “the arrival of this irregular, undocumented migration was linked to acts of violence and violations of the law, which created internal tension.”

Iván Briscoe, regional head of the Brussels-based conflict observatory International Crisis Group, told IPS that in the case of Colombia, “it has been impressive to receive almost two million Venezuelans, in a country of 50 million inhabitants, 40 percent of whom live in poverty.”

Colombia continues to be plagued by social problems, as shown by the street protests raging since April, “and therefore the temporary protection status, a generous measure by President Iván Duque’s government, does not guarantee that Venezuelan migrants will have access to the social services they may demand,” Briscoe said.

The large number of Venezuelans “means an additional cost of 100 million dollars per year for the health services alone,” said González, who spoke to IPS by telephone from the Colombian capital.

Against this backdrop, there have been expressions of xenophobia, as various media outlets interpreted statements by Bogotá Mayor Claudia López, who after a crime committed by a Venezuelan, suggested the deportation of “undesirable” nationals from that country.

There were also demonstrations against the influx of Venezuelans in Ecuador and Panama, as well as Peru, where the policy of President-elect Pedro Castillo towards the one million Venezuelan immigrants is still unclear, as well as deportations from Chile and Trinidad and Tobago, and new obstacles to their arrival in the neighbouring Dutch islands.

“Not everything has been rosy,” Stein admitted, “as there are still very complex problems, such as the risks that, between expressions of xenophobia and the danger of trafficking, the most vulnerable migrant girls and young women face.”

However, the head of the R4V considered that “we have entered a new phase, beyond the immediate assistance that can and should be provided to those who have just arrived, and that is the insertion and productive or educational integration in the communities.” Migrants who have benefited from Operation Welcome in Brazil, where there are more than 260,000 Venezuelans, shop at a market in the largest city in the country, São Paulo. CREDIT: Mauro Vieira/MDS-UNHCR

Throughout the region “there are places that have seen that immigrants represent an attraction for investment and labour and productive opportunities for the host communities themselves.”

Another example is provided by Brazil, with its Operação Acolhida (Operation Welcome), which includes a programme to disperse throughout its vast territory Venezuelans who came in through the northern border and first settled, precariously, in cities in the state of Amazonas.

More than 260,000 Venezuelans have arrived in Brazil – among them some 5,000 indigenous Waraos, from the Orinoco delta, and a similar number of Pemon Indians, close to the border – and some 50,000 have been recognised as refugees by the Brazilian government.

Brazil has the seventh largest Venezuelan community, after Colombia, Peru, the United States, Chile, Ecuador and Spain. It is followed by Argentina, Panama, the Dominican Republic and Mexico.

Throughout the region, organisations have mushroomed, not only to provide relief but also to actively seek the insertion of Venezuelans, in some cases headed by Venezuelans themselves, as in the case of the Fundacolven foundation in Bogota.

“We are active on two fronts, because first we motivate companies to take on workers who, as immigrants, are willing to go the ‘extra mile’,” said Venezuelan Mario Camejo, one of the directors of Fundacolven.

As for the immigrants, “we help them prepare and polish their skills so that they can successfully search for and find stable employment, if they have already ‘burned their bridges’ and do not plan to return,” he added.

On this point, Stein commented that the growing insertion of Venezuelans “shows how this crisis can evolve without implying an internal solution in Venezuela,” a country whose projected population according to the census of 10 years ago should have been 32.9 million and is instead around 28 million.

Based on surveys carried out in several countries, the head of R4V indicated that “the majority of Venezuelans who have migrated and settled in these host countries are not interested in going back in the short term.” Julio Meléndez is a young Venezuelan who has found employment in food distribution at a hospital in Cali, in western Colombia. Labour insertion is key for the integration of migrants in host communities. CREDIT: Laura Cruz Cañón/UNHCR

According to Filippo Grandi, the United Nations High Commissioner for Refugees, they have benefited from the fact that the countries of the region “are an example, and the rest of the world can learn a lot about the inclusion and integration of refugees in Latin America and the Caribbean.”

In the north of the region, Mexico is dealing with a migration phenomenon on four fronts. On one hand, 12 million Mexicans live in the United States. And on the other, every year hundreds of thousands of migrants make their way through the country, mainly Central Americans and in recent years also people from the Caribbean, Venezuelans and Africans.

In addition, the United States sends back to Mexico hundreds of thousands of people who cross its southern border without the required documents. And in fourth place, the least well-known aspect: Mexico is home to more than one million migrants and refugees who have chosen to make their home in that country.

Major recipients of refugees and asylum seekers in other regions are Turkey, in the eastern Mediterranean, hosting 3.7 million (92 percent Syrians), and, with 1.4 million displaced persons each, Pakistan (which has received a massive influx of people from Afghanistan) and Uganda (refugees from the Democratic Republic of Congo and other neighbouring countries).

In Sudan there are one million refugees, Bangladesh, Iran and Lebanon host 900,000 each, while in the industrialised North the cases of Germany, which received 1.2 million refugees from the Middle East, and the United States, which has 300,000 refugees and one million asylum seekers in its territory, stand out.