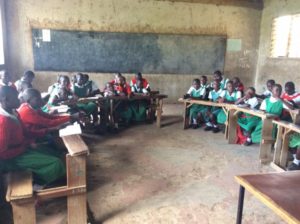 Data by the United Nations Educational, Scientific and Cultural Organization (UNESCO), shows that only 35 percent of students studying STEM in higher education globally are women. At primary and lower secondary levels, less than half of schools in sub-Saharan Africa have no electricity, computers or even access to the internet. Credit: Joyce Chimbi/IPS

DJIBOUTI CITY, Jan 28 2020 (IPS) – Dr. Anne-Maria Brennan loved science as a young girl. But instead of encouraging her, those around her made attempts to steer her in the “right direction”. “The right direction was in nursing, teaching and secretarial courses. I was told that girls do not study physics,” she tells IPS.

“These voices were so loud that I seriously considered becoming a music teacher. But then someone sensibly told me that I could become a scientist and an amateur musician, but there was nothing like an amateur scientist who was also a professional musician,” she says.

That was in the seventies, today Brennan is the vice-president of Science Engagement at the Foundation for Science, Technology and Civilisation in the United Kingdom.

Brennan previously served as an associate professor in Bioscience and Forensic Biology, at the School of Applied Science, London South Bank University.

“It turns out that girls could in fact study physics, or mathematics, science, technology and engineering,” she quips.

It has been five decades since Brennan swam against the tide, pursuing a career in science. But data by the United Nations Educational, Scientific and Cultural Organisation (UNESCO), shows that globally only 35 percent of students studying Science, Technology, Engineering and Mathematics – or STEM – in higher education are women. Further confirming that girls are still being steered towards domestic and caring career paths.

“Gender balance in enrolment as well as inclusivity in both participation and achievements in STEM education remains a global south challenge,” Professor Kalu Mosto Onuoha, President of the Nigerian Academy of Science, tells IPS.

“Education systems will never be balanced and inclusive when half of the population is not participating at per with their counterparts in STEM education,” he adds.

Similar sentiments were shared by other delegates participating in the 3rd International Summit on Balanced and Inclusive Education currently being held in Djibouti City, Djibouti. Organised by the Education Relief Foundation (ERF), over 200 delegates and government representatives from over 35 countries are currently in the Horn of Africa nation where state leaders are expected to sign a Universal Declaration on universal inclusive education.

Brennan affirms that the numbers are similarly low in the United Kingdom but notes some improvements in the fields of general practice and dentistry, where women have taken a lead.

She says there are few women in surgery and even fewer in engineering because men in these fields are considered unfriendly and the sectors too involved and dirty.

He says that these inequalities are first rooted in the exclusion and marginalisation of girls in education enrolment.

“Girls who eventually made it to school were encouraged to undertake feminine subjects like teaching. They were socialised to believe that they could only be good mothers if they took on lighter subjects,” Onuoha expounds.

“In developing countries there are many concerted efforts to address the first part of  the problem, even though painfully slowly, we are slowly closing gender gaps in education enrolment, retention and in some cases, achievements,” Professor Mahouton Norbert Hounkonnou, from the Benin National Academy of Science, Arts and Letters, tells IPS.

Hounkonnou is a full professor of mathematics and physics, and called for the demystification of sciences. “STEM education is taught as if only a few people are meant to understand but science and math is for all of us. Everybody does math on a daily basis without even knowing it.”

Hounkonnou says that balanced and inclusive education systems call for an overhaul in what is taught in STEMs, who teaches it and how it is taught. “Learners love to be engaged. Our classrooms must become more interactive. We also need a gender component, currently lacking, in many of our educational interventions,” he adds.

He called for investment in infrastructure and learning materials to improve the environment in which STEM education is provided.

U.N. research shows that countries in the sub-Sahara Africa face the biggest challenges. At the primary and lower secondary levels, less than half of schools have access to electricity, computers and internet.

“This forum provides an opportunity for us to define the shape a balanced and inclusive STEM education system should take, and make concerted efforts to build that system. It will take financial and technical resources, including the training of teachers to better interact with female learners,” says Hounkonnou.