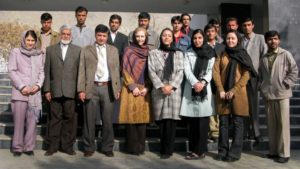 On April 23rd, 2019, the Charge d’Affairsof the U.S. Embassy in Kabul, Karen Decker, hosted more than 120 Afghan youth leaders at the ‘Youth and Peace’ Roundtable conference convened by the United States Agency for International Development (USAID). Attendees came from various backgroundsincluding academia, civil society, private sector, government, and international organizations. The one-day event was an opportunity for Afghans to openly discuss their opinions about the Afghan peace process in addition to their hopes and priorities for the future of their country. It provided participants with the opportunity to discuss ways their voices could be empowered in the dialogue surrounding the Afghan peace process. Efforts to strengthen the voices of those who often go unheard are critical to the pursuit of long term and sustainable peace throughout Afghanistan.

During the event, U.S. Ambassador John Bass encouraged the involvement of all Afghans in the dialogue surrounding the Afghan peace process. He indicated“Everyone can be part of the national conversation that informs the dialogue on peace, so you can have confidence that the people talking about your rights, your hopes, and your future, know what is important to you.” The open forum showed Afghans around the world that senior officials involved in efforts to stabilize their country value their thoughts, their voices have not been forgotten, and they can play a valuable role in shaping the future of their country. These kinds of efforts are useful models for engaging Afghans across the globe who have seen their country ravaged by conflict and instability for decades.

For decades, scholars and policy makers analyzing the Afghan peace process have criticized its limited inclusion of the Afghan government and diaspora communities around the globe. Intra-Afghan reconciliation depends on sustained dialogue between all parties involved in the conflict. Engaging the Afghan diaspora is a critical step towards making this aspiration a reality. Understanding the grievances and challenges faced by members of the Afghan diaspora , recognizing what they believe can be done to increase the prospects for progress, and ensuring they are given a platform from which they can voice their opinions about the future of their country are important steps the international community should take throughout the months and years to come.

Many of those who have fled the war in Afghanistan have gone on to pursue meaningful careers in business, academia, the private sector, and government around the world. Providing these members of the Afghan diaspora with a platform from which they can contribute to the conversation surrounding the challenges facing their country is critical. What has become known as “brain drain”has caused substantial challenges throughout Afghanistan and other regions faced with instability and low levels of economic development. The brain drain phenomenon suggests that those most capable of nurturing progress in their home countries are also those who have the means to pursue safer and more prosperous lives abroad. As a result of their expatriation, they play more limited roles in the pursuit of progress in their home countries. Many of those who could make the most valuable contributions to socioeconomic and political progress in Afghanistan are now scattered across countries with higher levels of socioeconomic development. Countries such as the United States, think tanks across the globe, nonprofits, and civil society, should cooperate closely with efforts to provide members of Afghan diasporas the means through which they can contribute to their country’s path to peace.

Though their decision to leave Afghanistan is understandable, the mass exodus of highly skilled labor from the country has affected the Afghan-peace process, socio economic development, and efforts to create conditions conducive to foreign direct investment detrimentally. Encouraging members of the Afghan diaspora living abroad to contribute to the dialogue surrounding the challenges facing their home country could prove enormouslyproductive.Many of those most capable of contributing to the pursuit of peace and reconciliation have left the country to pursue education and heightened career prospects abroad. Members of the large, well informed, resilient, and well-educated Afghan diaspora living in countries such as Canada, the United States, Germany, and the United Kingdom should play a substantial role in fostering the conditions necessary for the pursuit of Afghan peace.

Members of the Afghan diaspora around the world are endowed with an intimate understanding of the socioeconomic, political, and tribal roots of the conflict in Afghanistan. They possess first-hand knowledge of the difficulties faced by ordinary Afghans and their desire for peace is often independent of political interests. Many of these people have the wellbeing, prosperity, peace, and stability of Afghanistan at heart. They can contribute to a more clear understanding of the roots of the conflict and the development of realistic policies aimed at addressing them. Providing opportunities for the diaspora to contribute to the formulation and implementation of policies conducive to peace is of utmost importance.

The constructive nature of diaspora engagement is exemplified by Liberia, a West African country who experienced two devastating civil wars in recent history, which caused a substantial portion of the Liberian population to flee the country. Many settled in the West, with a substantial portion of them eventually resettling in the United States. The Liberian diaspora living in the United States became essential in achieving economic development, nurturing reconstruction, and peacebuilding in the country. As of today, Liberian Americans continue to provide essential foreign aid to their home country. Furthermore, Liberian professionals who lived the United States are returning to the country and providing valuable expertise in fields such as telecommunications, economic development, tribal reconciliation, and finance.

The assistance provided by the diaspora also extends to the political and security realms. For example, by fundingdemocratic opposition, the Liberian diaspora was able to encourage political dialogue and decrease levels of widespread political violence. Furthermore, Diaspora members pressured relatives living in the country to support justice reform and end the practice of trial by ordeal, which often resulted in death and bloodshed. Additionally, diaspora communities across the United States, particularly in the state of Minnesota, brought together diverse actors fueling the conflict who otherwise would not have been at the same table. They acted as track two diplomatic mediators.

Though much progress has been made throughout the past few months in encouraging intra-Afghan dialogue in a spirit of compromise, negotiations, and reconciliation, much work remains to be done. The people most passionate about the pursuit of peace are those who have suffered from its absence the most. It is an unfortunate reality that these people’s voices often go unheard. It is important that they are given the opportunity to discuss their thoughts and concerns, interact with policymakers and other stakeholders, and present a unified message about what they feel the future of their country should look like.

It is both their right and the international community’s responsibility to ensure that members of the Afghan diaspora are provided with platforms from which they can voice their hopes, expectations, and desires for the future of Afghanistan. Members of the Afghan diaspora and their families are those whose futures will be most affected by the decisions made by policymakers. It is therefore their right to make constructive contributions to the development of policies aimed at peacebuilding. Members of the Afghan diaspora possess critical knowledge and understanding of the conflict that has sown death and destruction throughout their country for decades. Including their knowledge and opinions in the shaping of the future of their own country is a vital step towards achieving long lasting and sustainable peace in the country.

Gabriel M. Piccillo is Vice President for Conflict, Stabilization, and Reconstruction at the International Institute for Peace, Democracy, and Development (IIPDD), an Afghan-U.S. NGO. He is based in Washington, DC.