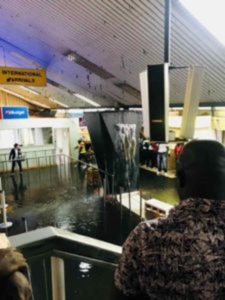 LILONGWE-(MD)-The Rainwater gushed through the ceiling inside the Kamuzu International Airport (KIA) building in the capital Lilongwe on Friday following torrential rainfall. But despite causing havoc among passengers, the embarrassment no flight operations were affected.

Passengers claimed they were drenched by the rain water and many of them had to move away with their luggage.

An eye witness, a passenger who was departing from the airport told The Maravi Post that the development occurred at about 1:20pm after heavy rain, accompanied by an hour-long windstorm, saw the roof of the airport building to leak like sieve.

The airport was being flooded at the time passengers headed for South African were boarding, while others travelling to Kenya and Ethiopia were checking in.

Photos of flooding in the airport circulated on social media platforms which showed passengers going through a flooded walkway to their flights.