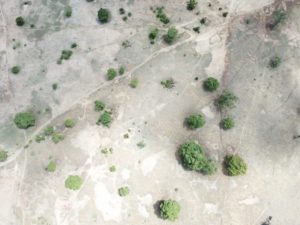 On all continents you have the issue of land degradation, and it requires governments, land users and all different communities in a country to be part of the solution. Credit: Albert Oppong-Ansah /IPS

ANKARA, Jun 17 2019 (IPS) – The coming decades will be crucial in shaping and implementing a transformative land agenda, according to a scientist at the United Nations Convention to Combat Desertification (UNCCD) framework for Land Degradation Neutrality (LDN).

UNCCD-Science Policy Interface co-chair Dr. Mariam Akhtar-Schuster, who spoke with IPS ahead of the start of activities to mark World Day to Combat Desertification (WDCD) on Monday, Jun. 17, said this was one of the key messages emerging for policy- and other decision-makers.

This comes after the dire warnings in recent publications on desertification, land degradation and drought of the Global Land Outlook, Intergovernmental Science-Policy Platform on Biodiversity and Ecosystem Services (IPBES) Assessment Report on Land Degradation and Restoration, World Atlas of Desertification, and IPBES Global Assessment on Biodiversity and Ecosystem Services.

“The main message is: things are not improving. The issue of desertification is becoming clearer to different communities, but we now have to start implementing the knowledge that we already have to combat desertification,” Akhtar-Schuster told IPS.

“It’s not only technology that we have to implement, it is the policy level that has to develop a governance structure which supports sustainable land management practices.”

IPBES Science and Policy for People and Nature found that the biosphere and atmosphere, upon which humanity as a whole depends, have been deeply reconfigured by people.

“There are of course areas which are harder hit; these are areas which are experiencing extreme drought which makes it even more difficult to sustainably use land resources,” Akhtar-Schuster said.

“On all continents you have the issue of land degradation, so there’s no continent, there’s no country which can just lean back and say this is not our issue. Everybody has to do something.”

Akhtar-Schuster said there is sufficient knowledge out there which already can support evidence-based implementation of technology so that at least land degradation does not continue.

While the information is available, Akhtar-Schuster said it requires governments, land users and all different communities in a country to be part of the solution.

“Nobody in a community, in a social environment, can say this has nothing to do with me. We are all consumers of products which are generated from land. So, we in our daily lives – the way we eat, the way we dress ourselves – whatever we do has something to do with land, and we can take decisions which are more friendly to land than what we’re doing at the moment.” UNCCD Lead Scientist Dr. Barron Joseph Orr said it’s important to note that while the four major assessments were all done for different reasons, using different methodologies, they are all converging on very similar messages.

He said while in the past land degradation was seen as a problem in a place where there is overgrazing or poor management practices on agricultural lands, the reality is, that’s not influencing the change in land.

“What’s very different from the past is the rate of land transformation. The pace of that change is considerable, both in terms of conversion to farm land and conversion to built-up areas,” Orr told IPS.

“We’ve got a situation where 75 percent of the land surface of the earth has been transformed, and the demand for food is only going to go up between now and 2050 with the population growth expected to increase one to two billion people.”

That’s a significant jump. Our demand for energy that’s drawn from land, bio energy, or the need for land for solar and wind energy is only going to increase but these studies are making it clear that we are not optimising our use,” Orr added.

Like Akhtar-Schuster, Orr said it’s now public knowledge what tools are necessary to sustainably manage agricultural land, and to restore or rehabilitate land that has been degraded.

“We need better incentives for our farmers and ranchers to do the right thing on the landscape, we have to have stronger safeguards for tenures so that future generations can continue that stewardship of the land,” he added.

The international community adopted the Convention to Combat Desertification in Paris on Jun. 17, 1994.

On the occasion of the 25th anniversary of the Convention and the World Day to Combat Desertification in 2019 (#2019WDCD), UNCCD will look back and celebrate the 25 years of progress made by countries on sustainable land management.

At the same time, they will look at the broad picture of the next 25 years where they will achieve land degradation neutrality.

The anniversary campaign runs under the slogan “Let’s grow the future together,” with the global observance of WDCD and the 25th anniversary of the Convention on Jun. 17, hosted by the government of Turkey.