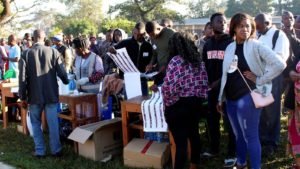 Various people on social media from various parts of Africa have applauded Malawians for the courageous fight for their freedom amid the ongoing election process.

This comes after Malawians took it to the streets following the 21st May 2019 election results that was declared not credible following several irregularities by the courts.

Among several things, Malawians have been praised for uprooting all rotting institutions and claim their much awaited freedom through the unending match of freedom for the past year.

“Malawians were cheated of Victory by Munthalika, they went into the streets fought with his police force.

“They went to court and the judiciary was not corrupt like Luke Malaba’s atrocious courts. Today they vanquished the dictatorship!,” Said one of the social media users.

In the past election, the outgoing president was declared the winner. This did not resonate well with many people who dragged the then election body led by Justice Jane Ansah to court together with the then incumbent president professor Arthur Peter Munthalika who was wrongly declared the winner of the election.

“Despite being one of the poorest country in the world, Malawi can be the next home of democracy in Africa,” said another social media user.

In the just ended elections, the unofficial results have pointed towards the opposition leader Lazarus Chakwera becoming the next president of Malawi.

Several people including Zimbabweans, Kenyans and Zambians have called upon their countries to emulate what Malawians have done and study Malawi’s institutions before engaging in the next elections.