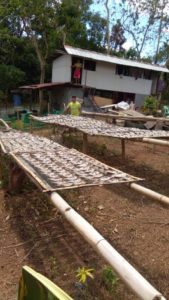 Ariel Lazarte of the Coalition of Leprosy Advocates of the Philippines (CLAP) shows off the dried fish production run by patients of a transient house operated by HD (Hope & Dignity) Philippines. Courtesy: Ariel Lazarte

MANILA, Sep 8 2019 (IPS) – Organisations supporting people affected by Hansen’s disease (leprosy) have social rather than capitalist aims, but they need to take a business-minded approach to their work if they wish to be sustainable, experts at a global conference in Manila, Philippines said.

In workshops conducted at the Global Forum of People’s Organisations on Hansen’s Disease in Manila on Saturday and Sunday, Sept. 7 and 8, representatives of organisations from Asia, Africa, and Latin America agreed that sustainability is the biggest challenge they face.

Every organisation faces some uncertainty over the continuity of donor or government financial support, so reducing or eliminating reliance on external funding is considered a critical priority.

Japan’s The Nippon Foundation (TNF) and Sasakawa Health Foundation (SHF), which sponsored the global forum and provided capacity support to the participating organisations, have long taken the view that sustainability should be the ultimate goal.

At a regional conference of people’s organisations held here in March, SHF Executive Director Dr. Takahiro Nanri stressed that his foundation’s goal was to see its beneficiaries become self-supporting. “In order to be truly sustainable, the organisation needs to develop an income-generating programme,” Nanri said at the time. Dr. Marie Lisa Dacanay president of the Institute for Social Entrepreneurship in Asia (ISEA) outlined the fundamentals of effective social enterprises, which were derived from research conducted by ISEA in India, Indonesia, Bangladesh and the Philippines. Credit: Ben Kritz/IPS

On Sunday Sept. 8, Dr. Marie Lisa Dacanay president of the Institute for Social Entrepreneurship in Asia (ISEA) outlined the fundamentals of effective social enterprises, which were derived from research conducted by the institute in India, Indonesia, Bangladesh and the Philippines.

In carrying out its mission, a social enterprise faces a number of external and internal challenges, Dacanay said.

Based on ISEA’s research, successful social enterprises can be organised following an entrepreneur non-profit model, a social cooperative model, a social business model, or what she described as “social entrepreneurship intervention,” which is a hybrid combining characteristics of all three models.
In determining which form of organisation is most suitable to the social mission, Dacanay told IPS, “I think everything starts with the reality. Every social entrepreneur starts with, ‘what are the needs, and the problem?’”

“The first step is really understanding the stakeholders you want to help,” Dacanay continued, “find out what they are doing already, and look at what gaps there are. That, along with the resources and capabilities available, define a way of moving forward, and then the organisational form will follow.”

In the Saturday workshop, Earl Parreno, the chairman of the Philippines’ Altertrade Foundation, Inc. (ATFI) conducted a training in business planning basics for the assembled people’s organisations.

Defining a social enterprise as one that pursues a triple bottom line philosophy (financial, social, and environmental results), Parreno explained that the fundamentals of business planning must still be applied, but that organisations that are made up of people who are both the providers and beneficiaries of a social mission are often handicapped by a complete lack of capacity.

“Poverty is not just lack of financial resources,” Parreno told the workshop participants in his presentation, “It’s really incapability, a lack of knowledge.”

Developing the capabilities can be an arduous process, but is achievable. One of ATFI’s areas of focus in the Philippines is among poor farmworkers in Negros Province, a centre for sugar production. Parreno described the success of the social enterprise supported by ATFI in marketing Muscovado sugar – semi-raw sugar that was at one time considered “poor man’s sugar,” but is now a premium-priced staple in organic food stores.

“The business ideation is really critical,” Parreno explained to IPS. “We have a saying here in the Philippines: gaya-gaya puta maya, which means something like ‘copycat.’” A common problem among new social enterprises, Parreno said, is a lack of originality in the revenue-generating product or service they wish to pursue.

“What we stress to our social enterprise partners is that they should not conceive a product or service that’s just better, but one that is truly different and has a ‘solidarity market,’” Parreno said, such as the market of “mindful consumers” for organic Muscovado sugar discovered by the Negros sugar farmers. “That solidarity market is so important. It really gives the people’s organisation a fighting chance.”

According to Parreno, developing a sound business plan, from business ideation through resource mapping, feasibility study, and market analysis answers one of the key concerns expressed by many of the forum participants in the post-workshop discussion: The difficulty in securing initial funding to launch a social enterprise.

“The only difference between this kind of (social) business and a conventional business is where the profits go,” Parreno explained. “The discipline and the steps that need to be taken to develop it are very much the same, and if the result is a good business plan, the investors to get it off the ground will follow.”

A poultry and dried fish production project located in Baras, Rizal Province, east of the Philippine capital, employs about 10 people, all residents of a transient house for leprosy patients. It is a good example of a social enterprise that has proved successful.

Ariel Lazarte, a member of Coalition of Leprosy Advocates of the Philippines (CLAP) who runs the social enterprise, told IPS that sales have been good enough that his out-of-pocket expenses have been fully covered by the revenue, as well as providing much-needed funding for the transient house residents.
The social enterprise, part of HD (Hope and Dignity) Philippines, a non-profit managed by Lazarte, makes about 560 dollars a month.

Half of this is ploughed back into the social enterprise and the remainder is used to pay for the living expenses of the patients, including paying for medicines, transport, food, water, and vitamins.
“The only outside funding we had was for [the pen for the chickens],” Lazarte told IPS, noting that the Tikkun Olam Foundation, which supports Hansen’s disease in the country, provided the funding for this.

“The residents of the house who are capable help to tend the chickens, which are layers, and produce the dried fish. We then sell the eggs and fish in the local market.”

Part of the marketing advantage the poultry project has is that the eggs are organic. “We use organic feed for the chickens,” Lazarte said. “No synthetic feed.”