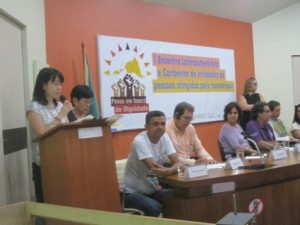 Kiyomi Takahashi of the independent Nippon Foundation explains the international movement for the rights of the victims of leprosy during the opening session of the First Latin American and Caribbean Meeting of Organisations of People Affected by Hansen’s Disease, held in the Brazilian city of Rio de Janeiro. The foundation is backing the process for the World Congress on Leprosy to be held in September. Credit: Mario Osava/IPS

RÍO DE JANEIRO, Mar 12 2019 (IPS) – The First Latin American and Caribbean Meeting of Organisations of People Affected by Hansen’s Disease, more widely known as leprosy, seeks to exorcise stigma and discrimination. The meeting has brought together around a hundred activists in Brazil.

The rights and participation of these people in all aspects of the World Health Organisation‘s (WHO) Global Leprosy Strategy 2016-2020 are the themes of the meeting, taking place in Rio de Janeiro from Mar. 12-14.

The gathering will establish this region’s proposals, as did recent regional assemblies in Asia and Africa.

The goal is for all the experiences and proposals to converge towards the World Congress on Leprosy that will take place in the Philippines in September, Kiyomi Takahashi, of the independent Nippon Foundation, which is backing the entire process, stressed during the opening session.

Brazil is at the forefront of the debate because it is considered the only country that has failed to eliminate the disease and has the highest incidence worldwide, with 25,000 to 30,000 new cases each year, 95 percent of the total in the Americas, according to official data.

This is an unacceptable figure for “a curable disease that is treated free of charge in the public health system,” said Artur Custodio, coordinator of the Brazilian Movement for the Reintegration of People Affected by Hanseniasis (Morhan), which organised the Latin America meeting together with the Federation of Organisations of People Affected by Leprosy in Colombia.

In addition, Brazil stands out for abolishing the word leprosy, because it is historically laden with prejudice. Since 1995, Hanseniasis or Hansen’s disease is the official name of the disease, although the WHO and the United Nations in general tend to use the term leprosy.

Brazil is not considered to have “eliminated” the disease – a classification that is defined when the incidence is reduced to less than one case per 10,000 inhabitants, said Claudio Salgado, president of the Brazilian Hansenology Society.

The statistics distort the reality of a disease that remains hidden. The organisation points out that the number of cases dropped from 5.3 million in 1980 to 597,000 in 2001, to meet the WHO target of elimination by the year 2000.

When a disease like hanseniasis is properly fought, its incidence falls steadily, but slowly and regularly, not abruptly, he noted.

What is hidden behind the figures, according to the expert, is shown by the case of Palmas, capital of the central Brazilian state of Tocantins, where an early diagnosis effort raised the incidence from 41.9 per 10,000 inhabitants to 219 per 10,000 between 2013 and 2016. Participants at the First Latin American and Caribbean Meeting of Organisations of People Affected by Hansen’s Disease, from seven countries in the region, as well as international organisations. This is the first time that regional activists have met to propose policies in defence of the dignity of those affected by leprosy. Credit: Mario Osava/IPS

This means, he argued, that when there is a clear decision to seriously address the disease, the numbers of people affected rise.

Another indicator from Brazil highlights an additional problem: there is 39 percent of “spontaneous demand” for treatment, which points to a lack of information and assistance. This is because spontaneous consultations occur in “advanced cases, with already apparent effects,” which are difficult to overcome, and sometimes incapacitating, Salgado said.

“The goal of elimination in 2000 had a positive effect of spurring initiatives and stimulating information and assistance. But declaring that it had been achieved led to an abandonment of commitments and actions,” said Salgado, a professor at the Federal University of Pará, in the northern Amazon region of Brazil.

“With that we are even losing knowledge, with reduced research in universities and reduced services. Compounded by the stigma of hanseniasis, a vicious circle is created and the tendency is for the incidence of the disease to grow again,” he concluded.

“There is a lack of research,” even to explain why the disease affects so many people in Brazil and why the prevalence drops when you cross the border, said Jorge Dominguez Sobrino, of Peru’s Health Ministry, which is working to fight leprosy in the province of Alto Amazonas, on the border with Ecuador.

“Perhaps genetic differences are a cause,” he told IPS.

In Peru the number of new cases points to “elimination,” but there is high prevalence in some provinces, especially in small towns. “There is a high hidden prevalence,” Dominguez Sobrino acknowledged. Norah Salcedo of Bolivia (R) and Silvia Uieacu of Peru, who took part in the first meeting of people affected by Hansen’s disease or leprosy, complained about the poor care in their countries for people who have the disease. Credit: Mario Osava/IPS

Early diagnosis is the primary right in relation to leprosy, agreed Salgado and Custodio. It will be necessary to revise and change some of the bases of the strategies to actually eliminate the disease, while some speak of “eradication”, with the reduction of new cases to zero.

One concern of the specialists is the identification of many cases in children, indicating contagion through undiagnosed family members or other people close to them.

A contradiction in the official data is precisely that many countries where “elimination” of leprosy has been declared, with a rate of less than one case per 10,000 inhabitants, have a worrying number of affected children.

In addition, where the prevalence is lower, such as in southern Brazil and other Latin American countries, the damage to affected persons is more serious due to late diagnosis, when effects such as loss of peripheral nerves, fingers or entire limbs are already irreversible.

Leprosy, a disease that has been present since time immemorial, is infectious and chronic, caused by the Mycobacterium leprae bacterium, as defined by the WHO, which specifies that it mainly affects the skin, peripheral nerves, the mucosa of the upper respiratory tract, the eyes and other structures.

Norah Salcedo, from the city of Santa Cruz de la Sierra, Bolivia, suffered irreversible damage to limbs and needs crutches. “There is no adequate treatment in my country, the sick continue to decline, without assistance,” she complained to IPS.

Bolivia is a country that “eliminated” leprosy, according to official data. Salcedo, as well as Silvia Uieacu of Peru, acknowledged that there is a great lack of knowledge about the disease.

Seven Latin American countries are represented at this first Regional Meeting, which brings together health officials and representatives of international entities, such as the Pan-American Health Organisation, and institutions from Japan – especially the Nippon Foundation – Germany and the United States.

Brazil also attracts international attention for compensating the victims of the segregation system in the so-called leprosariums where the sick were isolated. This practice was maintained by law in the country until 1986, although the possibility of a cure had been known since 1941 and it was clear that with treatment, the people affected by the disease were no longer contagious.

Since 2007, the Brazilian state has been compensating people who were isolated, but now the Morhan organisation is seeking to extend reparation to children who were separated from their parents. It is estimated that around 16,000 children suffered this forced separation.

These policies are of interest to similar movements in other Latin American countries, participants explained during the first day’s debates.

Many of the people segregated in these “colonies” continue to live in them, even after they were no longer isolated, because they have no chance of returning to their places of origin or rebuilding their lives, activists say.