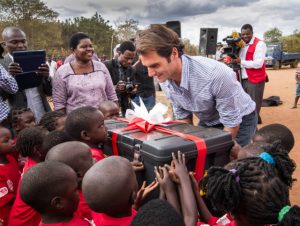 The Republic of Malawi, is a landlocked country in southeast Africa that was formerly known as Nyasaland. It is bordered by Zambia to the northwest, Tanzania to the northeast, and Mozambique on the east, south and west. The country is separated from Tanzania and Mozambique by Lake Malawi. Malawi is over 118,000 km2 (45,560 sq. mi) with an estimated population of 16,777,547 (July 2013 est.). Its capital is Lilongwe, which is also Malawi’s largest city; the second largest is Blantyre, the third is Mzuzu and the fourth largest is its old capital Zomba. The name Malawi comes from the Maravi, an old name of the Nyanja people that inhabit the area. The country is also nicknamed “The Warm Heart of Africa”.

Malawi is among the smallest and poorest countries in Africa. Lake Malawi takes about a third of Malawi’s area.

Malawi is among the world’s least-developed countries. Around 85% of the population live in rural areas. The economy is based on agriculture, and more than one-third of GDP and 90% of export revenues come from this. In the past, the economy has been dependent on substantial economic aid from the World Bank, the International Monetary Fund (IMF), and other countries. Malawi was ranked the 119th safest investment destination in the world in the March 2011 Euro money Country Risk rankings.

However, for unknown reasons celebrities the likes Tennis Great Roger Federer, Federer who holds several records of the Open Era: holding the world No. 1 position for 302 weeks (including 237 consecutive weeks); [ winning 17 Grand Slam singles titles; reaching each Grand Slam final at least five times (an all-time record); and reaching the Wimbledon final ten times. He is among the eight men (and among the five in Open Era) to capture a career Grand Slam have charities supporting Malawi youth.

Another world known celebrity is Material Girl Madonna. She has adopted Children in Malawi and has been a frequent visitor to the country in the last ten years. At least twice a very year in support of her Charity in the country.

Finally, Robyn Rihanna Fenty a Barbadian singer and songwriter. Born in Saint Michael and raised in Bridgetown, she first entered the music industry by recording demo tapes under the direction of record producer Evan Rogers in 2003. She ultimately signed a recording contract with Def Jam Recordings after auditioning for its then-president, hip hop producer and rapper Jay Z. In 2005, Rihanna rose to fame with the release of her debut studio album Music of the Sun and its follow-up A Girl like Me (2006), which charted on the top 10 of the U.S. Billboard 200 and respectively produced the hit singles “Pon de Replay” and “SOS”.   She also has decided to do her charity work in the country.

While other African countries like Swaziland and Kenya are benefiting from promoting tourism, Malawi which as we know has beautiful Lake Malawi which takes about a third of Malawi’s area, has failed to promote tourism by Failing to build structures and transportation to the lake area.

There are many followers of these celebrities who now know about Malawi and would visit places where their idols visit. However, we need to build an adequate Airport and Hotels around our tourist centers.

The Malawi Government should utilize the kindness of these celebrities to grow its tourism and Economy.