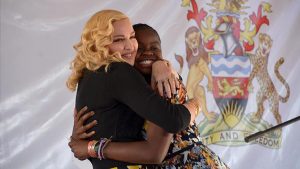 As Malawians, we were all very proud and warmed that Madonna was accompanied to the opening ceremony of this giant children’s Centre, by our President, Professor Peter Mutharika, First Lady Gertrude Mutharika and Vice President Dr. Saulos Chilima. This act by our leaders, gives collective acceptance and ownership of the Mercy David Pediatric Centre.

The Centre is no small section of the QECH, it is not a hastily-built structure jutting up the flat skyline of Ginnery Corner. It is a state-of-the-art Centre of excellence, specifically made for the children of Malawi. The Centre will also be a training centre for doctors, and provide outdoor health facilities for children’s relaxation activities.

This is an output of the Raising Malawi charity organization, which Madonna established when she first came to Malawi and adopted baby David. While many people in and outside Malawi, doubted the wisdom in permitting the boisterous international superstar, we commend Madonna’s tenacity, commitment and most of all her love for the children of Malawi.

She battled and won in and out of court episodes, in her bid to adopt the children: David, Mercy, and recently, the twins.
If there were any Malawians that felt the adoption were dubious, full of high-level tinkering, and all up-to-no-good, on Tuesday, Madonna put a big gob-stopper to those doubts.

It was not just the adoption that some Malawians had problems with; there were also challenges the music icon got embroiled with in the establishment of an academy for girls. The latter led to miles of bad press; the opening of the children’s Centre mutes it all.

In her humility Madonna said she “celebrate(s) the beautiful spirit of inspiration I found in Malawi. I have achieved so many things I never imagined I could do in my life like building a pediatric Centre in Malawi, raising six children four of them Malawians.”

As Malawians, led by the country’s leadership, celebrate the opening of the Mercy James Children’s Hospital at the Queen Elizabeth Central Hospital, we salute you Mama Madonna. We appreciate your magnanimous and generous manner. Most of all, we appreciate you for choosing to love Malawi, for choosing to adopt Malawi children.

May God bless you Mama Madonna!