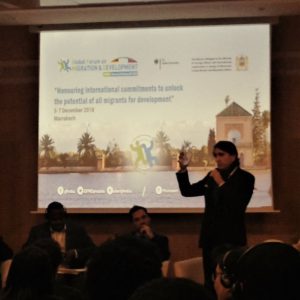 by Yossef Ben-Meir and Manon Burbidge
Marrakech
December 2018 is gearing up to be a pivotal month for migration on the world stage, and the epicentre is here, in Marrakech, Morocco, with two high-level fora taking place concerning development and migration. However, in order for the discussions that take place at these conferences to be impactful on the lives of ordinary people, the outcomes and agreements signed must be used as a catalyst for governments and concerned organisations to address the drivers intrinsic to migration, including rural poverty, lack of economic opportunity and climate change. To put this into practice, we offer our experiences of a grassroots, participatory development method as a humanitarian alternative to migration.

Firstly, the Global Forum for Migration and Development (GFMD) took place on 5th-7th December, based upon the theme of “Honouring International Commitments to Unlock Potential of All Migrants for Development”. The 11th summit of the Forum is the largest multi-stakeholder dialogue platform concerning migration and development, representing government policymakers, GFMD observers, members of civil society and the private sector. Although the proceedings of the GFMD are non-binding and voluntary, it is hoped that this conference will lay down foundations for the first Global Compact for Migration (for Safe, Orderly and Regular Migration), to be held on 10th-11th December, also in Marrakech.

This UN-led High-Level Political Forum will be the first international compact of its kind to address migration, designed to improve the management and co-operation of countries concerning the movement of peoples across borders. This agreement will also address the overarching causes of migration, such as poor access to sustainable livelihoods, the socio-economic and environmental implications of migration upon both origin and host countries, as well as working to enhance the value and impact of migrants for sustainable development.

Nevertheless, this cannot be achieved without acknowledging the growing storm confronting mankind: climate change. Climate change, development and migration are part of an inextricably linked nexus. The Environmental Justice Foundation predicts that up to 10% of the world’s population could be at risk of forced displacement due to climatic hazards by 2050. At the GFMD conference, the EuroMedA Foundation, who hosted a side event entitled “ A Euro-African Approach to Migration” highlighted that key issues set to face Africa will be desertification, drought and food insecurity, risks that are only going to worsen. Climate change can also compound existing, or create new political and economic issues in at-risk countries and further drive migratory patterns, with the distinct possibility of turning plans for “Safe, Orderly and Regular Migration” on its head.

In acknowledgement of this looming problem, the following describes a strategy of participatory development, which addresses economic security and climate resilience for those most vulnerable, and hence reducing the likelihood of necessary migration in future. Morocco has the distinction of simultaneously being a last-stop transit country for migrants from sub-Saharan Africa, as well as being a nation of emigrants to Europe, North America and the Middle East. Under current projections, the country is set to be on the frontline of climate change, riddled by food insecurity, droughts, desertification, catastrophic flash-floods in erosion prone mountainous areas, all of which will only be exacerbated by the continuing trends of warming temperatures.

It is overwhelmingly the case that in Morocco as elsewhere, during community-based discussions regarding socio-economic development projects located in regions with high levels of emigration, that local participants would strongly prefer to stay in their home communities, if only there were basic opportunities there. Indeed, many migrants prefer not to be migrants, but instead seek the sustainable development of their origin communities. Involving local community members in the decision-making processes reveals key contextual insights into the priority initiatives that will enhance the wellbeing of their communities: these are highly viable and implementable because the projects respond to their self-defined needs, and are therefore most likely to be sustainable.

For example, in order to create opportunities and economic activity in marginalised rural communities experiencing notable emigration, a $100,000 investment can establish a women’s cooperative of approximately 50 members, for agriculture, food-processing or the production of artisanal crafts. This can generate an average of a 50% increase to household incomes, which in turn benefits a further 300-350 people, through better access to schooling, healthcare and sanitation infrastructure. Clean drinking water systems to serve one municipality costs in the region of $350,000 and dramatically improves not only resilience to droughts and girls’ participation in education, but also decreases incidences of water-borne diseases and infant mortality.

Furthermore, in Morocco, like so much of Africa, almost all the endemic species of fruit and nut trees can grow organically, if only investments in certifications, nurseries and co-operative building were available. These tree plantations can be used for multiple purposes, including seeding riverbanks to fight erosion, improving local biodiversity, to diversify traditional income sources and for carbon sequestration initiatives that can be vital for long-term sustainability. In this sense, human development and economic projects and investments at the grassroots level can be leveraged to form commitments from the community to implement other initiatives that are beneficial for both protecting their local environments but also for global climate mitigation.

In order for potential migrants to be able remain in their communities, the agricultural value chain from nursery to market and the supporting infrastructure need to be put in place. The root of rural poverty, which ultimately propels migration, is in the insufferable bottlenecks at each step of the value-chain, slow-moving decision-making and ultimately a warming climate. Considering however the enormous opportunities that are discussed at global conferences, if applied at a community-scale, especially for example, with regards to added value from organic certification and carbon credit offsets, the ongoing impoverishment in rural places need not continue. So long as it does however, and if building climate resilience and adaptation is not incorporated with the migration-development paradigm, then the “ordered, safe and regular migration” hailed by the Global Forum and the UN’s HLPF will never be realised.

Yossef Ben-Meir, Ph.D. is a sociologist and is also President of the High Atlas Foundation, based in Marrakech.

Manon Burbidge is a post-graduate studying Human Ecology at Lund University, Sweden and currently interning at the High Atlas Foundation.