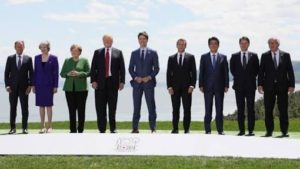 UNITED NATIONS, Aug 23 2019 (IPS) – As leaders of the seven major industrialised nations (G7) meet in the coastal seatown of Biarritz in the south west of France, one of the world’s leading women’s organisations is calling for the protection and advancement of women worldwide.

Katja Iversen, President/CEO of Women Deliver, and a two-time member of both G7 Gender Equality Advisory Councils (GEAC), is delivering a strong, gender-inspired message to the leaders: “Firstly, ditch the gender discriminatory laws you have on your books. Secondly, push progressive ones.”

“Thirdly, invest specifically in implementation of progressive laws, and also invest in women’s and civil society organisations (CSOs) that work every day to drive progress. And lastly, monitor, measure and be ready to be held to your promises.”

The four recommendations  are in the Biarritz Partnership on Gender Equality.

The G7 countries, comprising Canada, France, Germany, Italy, Japan, the UK and the United States, plus the European Union (EU), are holding their 45th annual meeting in France, August 24-26.

Women currently comprise nearly 50 percent of the global population of 7.7 billion people while the G7 accounts for more than 58 percent of the world’s  net wealth..

Iversen,  whose organisation is described as a leading global advocate for the health, rights and wellbeing of girls and women, has also brought together diverse voices and interests to drive progress for gender equality, with a particular focus on maternal, sexual, and reproductive health and rights.

In an interview with IPS, Iversen said that within the four focus areas, Women Deliver has identified 79 examples of laws and policies that advance gender equality, drawn from different regions of the world.

While this list is not comprehensive, she said, the examples show that progress is possible and is, in fact, happening.

“We call on the G7 and other world leaders to take these as inspiration, and act before they meet again in 2020, both at the G7 but also at the global Generation Equality Summit to be held in Mexico and France respectively.”

In Canada, abortion is allowed by law without specifications on gestational limits, it is available to women of any age, and it is covered by insurance in hospitals.

Colombia has compulsory sex education with curriculum tailored to the students’ age. Paraguay provides contraception free of charge and without an age restriction.

In India, a 2005 law reforms the discriminatory inheritance practices and establishes equality in land inheritance between unmarried girls and unmarried boys.

And in Rwanda, beginning 2010, at least 30% of parliamentary candidates had to be women – and today more than 60% actually are.

Meanwhile, the Gender Equality Advisory Councils (GEAC) have called on G7 leaders to: IPS:  Can you tell us what the Gender Equality Advisory Council is, and what role it plays at the G7?

IVERSEN: The G7 Gender Equality Advisory Council was created by Prime Minister Justin Trudeau to promote gender equality as an issue that deserves the attention of the G7, along with economic development, trade, technology and everything else that heads of state work on. This was last year when Canada held the presidency of the G7.

I guess we did a pretty good job since French President Emmanuel Macron right away said that he was going to continue the idea under France’s presidency. He formed his own at the beginning of the year, and I and a couple of others were asked to continue.

Trudeau, Macron and others know that leaders must invest in politically and economically in gender equality to create a healthier, wealthier, more productive and more peaceful world. Our role has been to show the G7 leaders what they need to do to drive progress.

What has been exciting and gratifying about these Councils is that it has really changed the conversation on gender equality. I mean, I talk about gender equality all the time, the members of the Council’s talk about it…but not everybody does. But more and more now do, and we see the discussions being much more prominent – and substantial – in governments, businesses, and in society at large.

IPS: You have served on the 2018 inaugural GEAC and now this one. Can you tell us about the experience of working with two different groups?

IVERSEN: I’m so proud of the work of both Councils and the fact that the various issues related to gender equality have been elevated to the global stage in such a big way.

Prime Minister Trudeau really went out on a limb. It seems a little crazy to say that advising G7 leaders on how to bring about gender equality was a radical idea in 2018. And yet it somewhat was.

We got a lot of leeway, so we didn’t just say – these are things that are good for women and these are things that are bad for women. We were able to show how to make gender inequality history, and make the case that gender is cross-cutting and countries must put a gender lens to their priority areas —the economy, the climate, technology, security, health, education, whatever. The prime minister insisted that we be truly independent, and that we were welcome to criticise Canada, where they were not doing well enough.

President Macron formed a bigger council to expand the work, but also to go deeper, and we have come up with specific recommendations to drive gender equality from a legal perspective. What this council is recommending is for governments to ditch discriminatory laws, push for progressive laws in their place, and put these priorities into the national budget.

IPS: How did you establish priorities for the GEAC and what was the process like?

IVERSEN: It has been fascinating. The work takes time and consensus can be hard won but the process is also invigorating, because we all learn from each other, and because the results are a lot more powerful.

That’s exactly what the G7 needed: ideas, energy, and consolidated advice from a wide range of experts with different lived experiences. And done in a kind and collaborative manner. Gender equality is not a war, it is an investment where everybody wins.

In the 2018 Council, we outlined many, if not all, of the cross-cutting issues that need a gender lens in a report to the G7. This year we focus on what kind of legislation we could recommend. We honed in on reforms in four areas: Ending gender-based violence; ensuring that health and education are high quality, inclusive, and equitable; promoting women’s economic empowerment; and ensuring full gender equality in policies and public life.  Investment in these areas would move the needle on gender equality.

IPS:  What has been the impact of GEAC in 2018 and what do you hope to achieve this year?

IVERSEN : Prime Minister Trudeau’s creation of an independent Gender Equality Advisory Council put the issues of gender equality on par with the other economic and social issues at the 2018 G7. And President Macron saw the impact that elevating gender equality had, and embraced the idea of establishing his own council.

Ideally, the G7 will remain a platform to promote gender equality and all the economic, political, and social benefits that result from it. But we want all governments to join this work. Not just because it’s the right thing to do but because doing so is better for countries politically, economically, and socially.

IPS: Are commitments enough? How do you hold governments accountable for their commitments made at G7 to ensure tangible, sustainable outcomes?

IVERSEN: Words matter. But some words matter a little more in this context and those are the ones that are written into legislation. Promises are important but they are not enough and we know that.

We need action. But experience tells us we also need accountability. Monitoring and evaluation mechanisms show what is working and whether promises are kept. It gives governments opportunity to learn and adjust – and it gives civil society advocates arguments and information to hold governments accountable to their promises.

IVERSEN: It is a good question and I will answer it – but then let’s also save some time and take a look to the future.

Civil society plays a crucial role when we talk about gender equality and about instituting legal and profound change. There are women-led organisations that focus on local issues and there are global NGOs that tackle a broad set of problems all over the world. And there’s everything in-between.

Let’s look to Ireland where women-focused organisations led the year-long campaign that finally legalised abortion. Let’s look to Uganda where civil society, not least youth advocates were instrumental in preventing the government from banning sexuality education. Let’s look to the MeToo, Time’s Up and Ni Una Mas movement in South America that is changing perceptions of women and apathy about gender-based violence. That is real fundamental change.

Big change comes when the different sectors band together – when government, private sector, the judiciary, civil society, and even the private sector finds common ground and push together. That is the point we are getting to regarding gender equality and that is why this G7 Summit is important and why the next year will be instrumental.

In addition, programs intended to serve young people are often designed without meaningful youth engagement, and so impact falls short. The ideas and experience of young people must be included in the design and implementation of all policies and programs designed to serve them.

2020 marks the beginning of the UN’s Decade of Progress on the SDGs. It is also the 25th anniversary of the Beijing Declaration and Platform for Action on gender equality. It’s hard to remember now but that was revolutionary and we are looking for another big push on this road to gender equality – whether in relation to women in leadership and the economy, health, or education. There are big plans for activities in 2020 and Women Deliver is part of that.