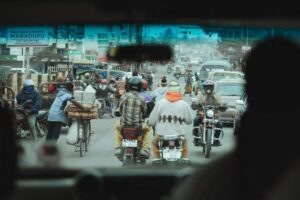 Questions are asked whether the Organisation for Economic Co-operation and Development (OECD) agreement to force the world’s biggest companies to pay a fair share of tax will benefit the global South. Credit: Hugo Ramos/Unsplash

BRATISLAVA, Oct 20 2021 (IPS) – An agreement between 136 countries aimed at forcing the world’s biggest companies to pay a fair share of tax has been condemned by critics who say it will benefit richer states at the expense of the global South.

A deal agreed on October 8, and which covers around 90% of the global economy, includes plans for a global minimum corporate tax rate of 15%.

The Organisation for Economic Co-operation and Development (OECD), which led negotiations on the agreement, has said it will help end decades of countries undercutting each other on tax.

But independent organisations campaigning for fairer global taxes and financial transparency argue it will rob developing countries of revenues needed to recover from the COVID-19 pandemic, ultimately pushing millions more people into poverty.

Matti Kohonen of the Financial Transparency Coalition (FTC) civil society group told IPS: “In principle, a global minimum corporate tax is a good idea, but only if the rate is right and implemented properly. Under this deal, the main beneficiaries are the OECD – which led the negotiations – and its largest members.”

Calls for a global minimum corporate tax rate have grown in recent decades amid increasing scrutiny on the tax practices of multinationals.

The OECD deal, which has an aspirational implementation date of 2023, is designed to set a floor on corporate taxation and stop companies shifting profits to countries with the lowest tax rates they can find.

The OECD says the minimum global rate would see countries collect around USD150 billion in new revenues annually, and that taxing rights on more than USD125 billion of profit will be moved to countries where big multinationals earn their income.

But independent groups say the agreement falls far short of what is needed for a fair global corporate taxation system and has ignored the needs and wishes of developing nations, which rely more heavily on corporate tax than richer states.

According to OECD research Corporate Tax Statistics: Third Edition (oecd.org), in 2018, African countries raised 19% of overall revenue from corporate taxation as opposed to 10% among OECD states.

Critics point out that the 15% floor agreed to is well below the average corporate tax rate in industrialised countries of around 23%, potentially creating a ‘race to the bottom’ as countries cut their existing corporate rates.

It is thought a number of developing states had wanted a higher minimum global rate.

Civil society groups critical of the agreement also have concerns over many exemptions in the deal – there is a ten-year grace period for companies on some aspects of the agreement, and some industries such as extractives and financial services, are exempt.

Meanwhile, they highlight, only 100 of the world’s largest companies would be affected by part of the agreement aimed at getting highly profitable multinationals to pay more taxes in countries where they earn profits. Moreover, the minimum global tax will only apply to companies with a turnover of more than 750 million USD, which would exclude 85-90% of the world’s multinationals.

The fact that countries will have to waive digital services taxation rights, which are important sources of revenue for some developing states, is also problematic. And there are concerns that in many cases extra tax paid by corporations ‘topping up’ their tax bill to 15% will go to countries where they are headquartered. In many cases, this will be in already rich nations such as the US, UK, and Europe.

Chenai Mukumba of the Tax Justice Network Africa advocacy group told IPS: “We have an opportunity to reform the global tax system to make it right for global south countries, but we are settling for so much less. This is a lost opportunity to balance the scales, to put fairness at the centre of the system.”

The deal could have a negative effect on African countries, in particular, she pointed out. Nigeria and Kenya have not signed up for the fair tax deal. Credit: Muhammadtaha Ibrahim Ma’aji/Unsplash

Kenya and Nigeria are among four countries that have not signed up for the deal.

“A lot of African countries currently have corporate tax rates of 25-30%. If the minimum rate is 15%, there is a great incentive for companies to shift profits elsewhere,” Mukumba said.

“Kenya hasn’t signed up to the deal because it is trying to raise revenue from its digital services taxation rights. It may end up buckling to the pressure [to join the deal],” she added.

OECD impact assessment studies for the deal published in 2020 https://www.oecd.org/tax/beps/economic-impact-assessment-webinar-presentation-october-2020.pdf showed that developing nations would gain as much as 4% extra corporate tax revenue.

The organisation told IPS this month (OCT) that it is now expecting those extra revenues to be even higher because of changes to the agreement since last year.

However, studies Pillar 1 impact assessment – 04.10.21 FINAL (oxfamireland.org) by the global aid group Oxfam estimate that 52 developing countries would receive around only 0.025 percent of their collective GDP in additional annual tax revenue under the redistribution of taxing rights.

The group also says a 25% global minimum corporate tax rate would raise nearly USD 17 billion more for the world’s 38 poorest countries – which are home to almost 39% of the global population – as compared to a 15 percent rate.

Speaking just after the agreement between the 136 countries was reached, Oxfam said in a press release that the deal was “a mockery of fairness that robs pandemic-ravaged developing countries of badly needed revenue for hospitals and teachers and better jobs”.

It added: “The world is experiencing the largest increase in poverty in decades and a massive explosion in inequality, but this deal will do little or nothing to halt either.”

Despite the criticism, OECD officials are adamant that the agreement will benefit developing nations.

They point out that it does not affect any state’s national corporate tax rates, and that the 10-year grace period only applies to a very small amount of income – 5% of the carrying value of a firm’s tangible assets and payrolls in a jurisdiction.

Grace Perez Navarro, Deputy Director of the OECD’s Centre for Tax Policy and Administration, told IPS: “The global minimum tax is aimed at stopping tax competition that is causing a race to the bottom in corporate tax rates.

“It does not require countries that have higher rates than 15% to lower their corporate tax rate, it just ensures that those countries will be able to collect at least 15%, no matter what type of creative tax planning a multinational comes up with.

“It will also reduce the incentive of multinationals to artificially shift their profits to low tax jurisdictions because they will still have to pay a minimum of 15%.”

She added: “It will also relieve the pressure on developing countries to offer excessive, often wasteful tax incentives while providing a carve-out for low-taxed activities that have real substance. This means that developing countries can still offer effective incentives that attract genuine, substantive foreign direct investment.”

But Mukumba said the problem is not that the deal will not bring any extra revenue to developing nations, but that richer nations will get much more out of it.

“Developing nations want a global corporate tax minimum, they have pushed for it in the past. They will get revenue under this deal, yes, but nowhere near as much as richer nations will get out of it,” she said.

This is problematic at a time when many developing nations are struggling with the effects of the COVID-19 pandemic and need revenue.

“This [deal] will mainly support recovery efforts in the G7 countries instead of developing countries which have been most impacted by the COVID-19 pandemic and are more in debt, preventing them from generating enough revenues to recover from the crisis and ultimately throwing millions more people into extreme poverty,” said Kohonen.