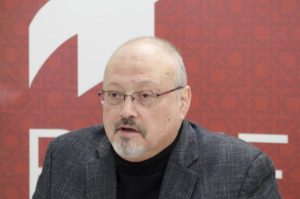 Jamal Kahshoggi, a US-based journalist who frequently criticised the Saudi government, was killed while visiting the Saudi consulate in Istanbul, where he was collecting papers for his wedding. Courtesy: POMED/CC by 2.0

UNITED NATIONS, Sep 4 2019 (IPS) – The United Nations is under growing pressure to scrap an event it is co-hosting with the private foundation of Saudi Arabia’s crown prince Mohammad bin Salman, who has been linked to the killing of journalist Jamal Khashoggi.

On Tuesday, Sunjeev Bery, director of Freedom Forward, became the latest leader of a campaign group to press the U.N. to cancel the Sept. 23 event, saying it would help repair bin Salman’s reputation over the Khashoggi murder.

The event, known as the Misk-OSGEY Youth Forum, is a partnership between the U.N.’s youth envoy, Jayathma Wickramanayake, and the Misk Foundation, a culture and education foundation chaired by bin Salman, who is better known as MBS.

“No one — especially not the U.N. — should be partnering with MBS or his personal Misk Foundation,” Bery told IPS.

Why is the UN helping the Saudi crown prince whitewash his record by co-hosting a conference with a foundation he leads just a year after the murder of Jamal Khashoggi? https://t.co/r65LWZWN0J pic.twitter.com/7C8LoV4MTb

The Misk-OSGEY Youth Forum will take place in New York only 10 days before the first anniversary of Khashoggi’s murder on Oct. 2 last year, when Saudi government agents killed and dismembered the journalist inside the country’s consulate in Istanbul.

The CIA later determined that MBS had personally ordered the hit. Saudi officials, who initially said Khashoggi had left the consulate alive, now say the journalist was killed in a rogue operation that did not involve MBS.

Saudi Arabia’s mission to the U.N. did not answer requests for comment from IPS.

The four-hour workshop for 300 young people at the New York Public Library will occur on the sidelines of the U.N. General Assembly and promote green themes, corporate responsibility and other aspects of the U.N.’s Sustainable Development Goal (SDG) agenda.

It will feature Alexandra Cousteau, an environmentalist and granddaughter of French explorer Jacques-Yves Cousteau; and Bart Houlahan, an entrepreneur who promotes sustainable business practices.

Other speakers include Andrew Corbett, an expert on entrepreneurship at Babson College, Paul Polman, former CEO of consumer goods firm Unilever, and Ann Rosenberg, an author and U.N. technology expert.

Dr. Reem Bint Mansour Al-Saud, a Saudi princess and an envoy to U.N. headquarters in New York, who advocates for empowering women and development in the Gulf kingdom, will also speak at the workshop.

Khashoggi, a United States-based journalist who frequently criticised the Saudi government, was killed while visiting the Saudi consulate in Istanbul, where he was collecting papers for his wedding.

U.N. expert Agnes Callamard issued a report in June that described the assassination as a “deliberate, premeditated execution,” and called for MBS and other Saudi officials to be probed.

The Misk-OSGEY Youth Forum comes after years of tensions between the U.N. and Riyadh over the war in Yemen, where Saudi Arabia is leading a military coalition against the country’s Houthi rebels.

The conflict has killed tens of thousands of people and caused led to a major humanitarian crisis.

“The crown prince and his violent government must be held accountable for their human rights crimes,” said Bery, who advocates for the U.S. to cut ties with Saudi Arabia and other authoritarian regimes.

“Instead, misguided U.N. staff are absurdly giving the crown prince a public relations platform as he attempts to wipe away the blood of so many dead Yemeni children.”