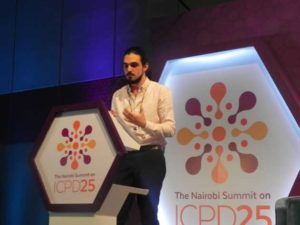 Adding his voice in bridging the gap of Sexual Reproductive Health Rights (SRHR) among the youth, Martin Karadzhov, chair for Global Youth Steering Committee, told delegates at a youth event themed “our bodies, our lives, our world”, at the 25thInternational Conference on Population Development (ICDP25).

Although there are 1.8 billion youths between the ages of 10 and 24 years, they continue to be marginalised when it comes to SRHR issues. Karadzhov said LGBTQI youth in many countries were subjected to harmful practices including pressure on them to convert, a practice with no scientific basis which is also unethical and, in most instances, a torture. “Justice for one is justice for all,” he said.

He urged governments to repeal discriminatory laws against the LGBTQI community, adding that they were denied access to Sexual Reproductive Health (SRH) services on the basis of their sexuality. “Our human rights are not controversial,” said Karadzhov.

Young people often only a statistic

Echoing his sentiments was Mavis Naa Korley Aryee, a youth programme national radio host at Curious Minds. She said although there are 1. 8 billion reasons why young people should be involved in decision-making process, they are only mentioned as statistics.“Being part of a minority should not be a reason for discrimination,” said Aryee. She advocated for access to SRH services to be made available to all young people, adding that they have a right to make choices about their bodies. She was, however, encouraged by the way the global youth had stood up to be counted despite the challenges they face. Aryeenoted that the youth contributed to the development agenda leading to ICPD25, adding that the UN Sustainable Development Goals (SDGs) are also about them.

“We have then numbers. No one will ignore 1.8 billion reasons. The more we collaborate, the more we advance our agenda,” she said.

Fighting for a seat a the table

The global youth is fighting for a seat on the decision-making table where Marco Tsaradia, a Member of Parliament from Madagascar, said young people are told: “things have always been done like this”. He said the youth are keen to bring about new ideas because they are talented and innovative. However, he complained that the existing decision-making structure prevented them from achieving this objective.

It gets worse if young persons with disabilities want to enter the table because, said Leslie Tikolitikoca from the Fiji Disabled Peoples Federation, they tend to be “judged on their disabilities rather than their abilities”. For example, he said, instead of providing services to those who are unable to hear or see, those in power would rather make decisions on their behalf instead of helping them to contribute to the discussion.

“How are we going to ensure that we leave no one behind if we don’t involve all young people?” he wondered.

Following the youth’s proposed solutions to their SRHR, Henriette Geiger, from the directorate of people and peace at the European Union Commission, said it was time to act. She said the EU has proposed that governments should consider reducing the voting age to 16 years. “That would make a huge impact in decision-making on youth policy,” she said, adding that the EU was funding key initiatives to change public perceptions about the LGBTQI community by using film.

Although she said the EU was involved in many SRHR programmes in Africa, she further pledged €29 million towards SRHR programmes for the youth, urging organisations to take advantage of this initiative.

Not all doom and gloom

During the opening address of the ICPD25, the United Nations Population Fund (UNFPA) executive director, Natalia Kanem, told delegates “good progress is not good enough”, insisting that the promises made to girls, women and everyone should be kept.

Kanem paid special tribute to the youth, for bringing new ideas and resources to make rights and choices a reality.

“To the youth, you’re inspiring in pushing us to go further Thank you,” said Kanem.

It is not all sad and gloomy for the youth, said Ahmed Alhendawi, the secretary-general of the World Organisation of the Scouts Movement. The fact that the youth have formed themselves into a global youth movement should be celebrated because that is how they are going to win the fight to be part of decision-making processes.