Climate change is predicted to put pressure on the Nile Valley and Delta, where about 95% of Egypt’s population resides. Credit: Hisham Allam/IPS

This summit has drawn the attention of world leaders, high-ranking United Nations officials, and thousands of environmental activists worldwide.

The COP27 summit is an annual gathering of 197 countries to discuss climate change and what each country is doing to limit the impact of human activity on the climate.

About 90 heads of state have confirmed their attendance at the COP27 in Sharm El-Sheikh, according to the special representative of the Egyptian presidency.

Amr Abdel-Aziz, Director of Mitigation at Egypt’s Ministry of Environment, noted that the central theme for COP27 is implementation.

“We hope to demonstrate what that looks like in terms of mitigation and adaptation. If the summit can address the topic of implementation in all of its discussions, it will be a sign of its success,” Abdel-Aziz said.

The primary objective of COP27 is to achieve positive results in terms of emissions reduction; on the agenda is also a discussion of financing losses and damage.

“We also intend to advance the agenda to double climate adaptation financing by 2025 and reach an agreement on the unfulfilled $100 billion financial pledge from developed countries,” Abdel-Aziz told IPS.

The overarching goal is to strike a balance between all parties’ interests. The mitigation program, for example, is primarily driven by developed countries and small island developing states, which are currently experiencing severe climate change impacts.

On the other hand, emerging markets are principally accountable for adjustments, losses, and damages.

“Our goal is to achieve a balanced result that meets all of these goals and objectives,” he continued

“We wanted to cover as much of Egypt’s total emissions as possible,” Abdel-Aziz explains, “So we focused on three sectors: energy, oil and gas, and transportation. We also chose the industries that are most likely to reduce emissions.”

Abdel-Aziz says he is optimistic about meeting the goals, especially in the transport sector, which could even exceed the goals as there has been significant progress including in the area of “transportation electrification and other forms of sustainable mobility.”

The summit’s top priorities are to achieve the Paris Agreement’s goals and progress in the fight against climate change. According to scientific research, limiting global warming to 1.5°C by 2030 requires cutting emissions in half.

“Climate finance must be available for this to occur,” COY 17 Programme Leader Hossam Imam told IPS.

COY17 is an annual event organized by YOUNGO, the Official Youth Constituency of the United Nations Framework Convention on Climate Change (UNFCCC). This year’s event will take place on the sidelines of the 27th Party Summit in Sharm El-Sheikh, Egypt (COP27).

Imam will collaborate with 1,500 young people from 140 countries to draft the youth statement, which will be delivered to the presidency of the Climate Summit and discussed by high-ranking officials.

“The impact of climate change on indigenous peoples and coastal city dwellers who face flooding is one of the most pressing issues to be addressed in COY 17,” Imam said.

The Nile Valley and Delta, where about 95% of Egypt’s population resides, make up only 4% of the country’s natural area. Climate change is predicted to put pressure on these areas, particularly the Nile, and the region could experience more frequent droughts.

“Egypt is also one of the few nations that actually struggle with water scarcity,” Fathy added.

“Since the world faces several economic issues in addition to the energy crisis, we expect that the conference will produce workable proposals,” said Fathy, the founder of the ‘Youth Love Egypt Association,’ involved in organizing the COY17 conference and the promotion of the COP27. “We expect the summit to produce a workable charter and to be COP for actions rather than COP for pledges.” 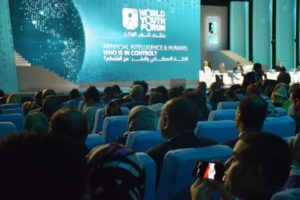 At the Global Youth Forum in Egypt thousands of youth attend a session on Artificial Intelligence and to hear Sophia — a humanoid robot capable of displaying humanlike expressions and interacting with people. Credit: Stella Paul/IPS

SHARM-EL-SHEIKH, Egypt, Dec 18 2019 (IPS) – On late Monday morning, a motley group of more than a thousand youth gathered in a hall in Sharm el-Sheikh, Egypt, to listen to Sophia — a humanoid robot capable of displaying humanlike expressions and interacting with people. Yahya Elghobashy, a computer science engineering student from Cairo, sat excitedly in the audience. A few meters away from him, also in the audience, was Abdel Fattah el-Sisi — the President of Egypt.

As Sophia and a panel of scientists on the stage spoke about Artificial Intelligence (AI), El-Sisi was seen listening attentively and taking notes while the young crowd around him squealed and took photos.

“It was very exciting that I was going to see and hear the world’s best humanoid robot and that the president himself was there,” Elghobashy revealed, a big smile on his face.

Since 2017, Egyptian president El-Sisi has been seen here at the World Youth Forum each year. The event is now the Arab world’s largest youth gathering, focusing on peace, culture and development.

The 3-day forum, which ended yesterday, Dec.17, drew nearly 8,000 people including 64 speakers and several hundred youth leaders from Africa, Asia, Europe, and the Americas. There was also a large contingent of government officials and ministers in attendance, which has been happening under the direct patronage of the president. The core theme of the event is “Egypt: where civilisations meet” – an effort to highlight the cultural diversity of the country to the world.

Technology and innovation in the spotlight

But the dominating subject of discussions at the forum this year was technology and innovation. Of the 20 sessions, half were centred around technology and artificial intelligence (AI), cyber security, industrial innovation and blockchain technologies and applications.

On Monday, Dec. 16, at the session on AI, youths were seen loudly cheering as Sophia the robot spoke. Designed by Hanson Robotics of Hong Kong, Sophia described herself as a robot who is here to assist in the fields of research, education, and entertainment, and help promote public discussion about AI.  At the session, a panel of youth experts also talked passionately about ethics and the future of robotics. “You can build robots that are energy-efficient and also run on renewable energy,” said the humanoid robot to the cheering young crowd.

“This is very progressive that we are discussing advanced technology like AI here. As an engineering student, I think it especially encourages us to talk about what is most relevant to our life, our country and our future,” Elghobashy told IPS.

At a press conference later, El-Sisi assured people that the government was indeed paying attention to the developments at World Youth Forum and planned to bring cutting-edge technologies to the country’s youth for a better future.

“We will be launching a series of new universities teaching all relevant digital age sciences. We will also seek partnerships with international institutions to guarantee a high level of quality education,” El-Sisi said.

Besides the excitement of ground-breaking technologies, the forum also threw light on the risks and challenges of new technologies such as  blockchain – a decentralised, distributed ledger that records the provenance of a digital asset. Cryptocurrency, like Bitcoin, is a perfect example of blockchain technology.

Challenges faced by various countries regarding blockchain due to the lack of national legislation in countries other than China and the United States was also a prominent talking point. This includes possible threats like blockchain being misused by terrorist organisations to sell oil, purchase weapons, and exchange digital currencies.

Samia Khamis is a student of international relations in Amman, Jordan who traveled to the forum for the first time. “I came via Cairo, which is only an hour away from Jordan, but the moment I stepped out of the airport I could feel that the air pollution level is much higher than my country,” she told IPS.

Cairo is one of the world’s most polluted cities.  According to NUMBEO – an air quality data monitor, residents of Cairo breathe in polluted air, with levels reaching as high as 85 percent.

According to Khamis, Egypt needs to develop technologies that could clear its sky which is “dark” because of pollution. “It is good that we are brining so many technologies on display here, but we need technologies that can make our environment better and our air clearer,” she said.